I know I showed some of the tree photos yesterday, but here's the view from the other sidewalk, the one that actually gets the most foot traffic. 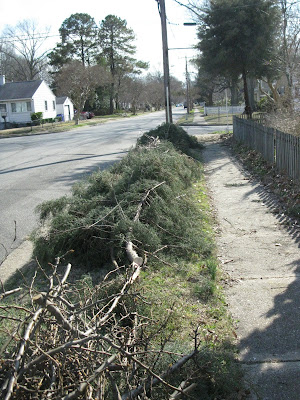 Is it any wonder we had complaints? 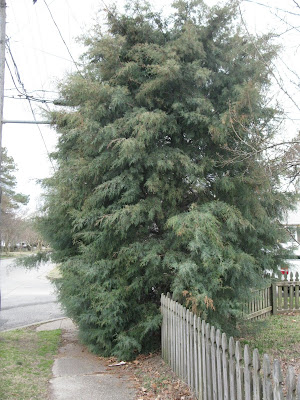 It was one of those things where every so often one of us would say "We really need to take care of that." and then that would be the end of it. You'd think that after I came home one night to find a man in a sleeping bag underneath it, we'd have felt some urgency to clear it out, but no, we didn't. It's done now though.

I don't know why I hate pruning trees and shrubs. I'd really like to leave everything natural, but it just doesn't work that way on a suburban lot.
Next in line for a pruning is our russian olive bush. It took a beating in the nor'easter and Steve's been dying to start in on it, so it won't be long.

On the knitting side of things, I took my Saroyan shawl into work today so my lunch group could see a finished product for a change. Steve wanted to mail it to my sister-in-law today, but I wouldn't let him until I showed it off. I think I'm feeling kind of selfish about it, but I would never wear it, so off it goes. As I said before, she's a knitter, so I know she'll appreciate it.
And fourteen more school days until spring break, but who's counting??
Posted by Rose at 4:30 PM